High on my India wishlist was to see a leopard in the wild. According to someone in the know, the place to do this is near a remote village in the middle of Rajasthan. Far away from the crowds and the popular wildlife reserves, through a safari organised by Mr. Devi Singh, a descendent from the local Maharadja. My reservation had been confirmed a few days ago and on the day of the safari I happily asked my driver to take me to the safari resort. He looked at me in big surprise – the closest wildlife reserve was days away-  but we took off, found the resort and, to the great relief of the driver, the safari jeeps. He was now convinced this was a real safari.

After a while Devi Singh arrived, clearly a man with authority. Without much fussing around he took the wheel of one of the jeeps and off we went to the rocky hills where the leopards hide in caves during daytime to avoid the heat. We waited for the leopards to come out of their hiding place, while enjoying the sunset, some other animals and a sip of beer from the bottle.

I was a bit sceptical, as the hill we were observing was not far from a couple of local villages and had a small temple halfway. How could leopards live so close to men?

But there he was, slowing coming out of the cave near the temple and going down the hill in search of food. He moved cautious, screening the surroundings for any danger but not seeming to be bothered by our jeep. For almost two hours, I watched the leopard easing his way down the hill and coming closer and closer to the jeep, till we were almost eye to eye. 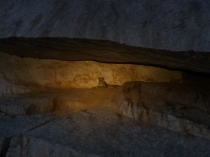 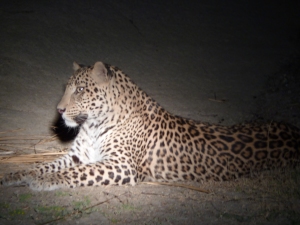 Devi Singh, who wants to see at least one leopard every day, didn’t want to leave the scene and – reluctantly – I had to ask him to say goodbye to the leopard as it still was a long drive back to the hotel.

Only back in his home he told me about his efforts to safe the leopards and how he turned from a hunter into a passionated fan of the rare animals.

He has made it his mission to protect the leopards around his village. A remarkable story and an unforgetable experience!